At the period’s end the condominium inventory is up nine (9) to 60. That includes three new “under construction” units at Creekhouse (Snowcreek Phase 7). There were 28 new condo listings in the period and eight (8) are already under contract and in escrow. Some of the new condo listings appear to be priced within reason. Others appear to be next year’s pricing, or the year after.  But that is assuming the recent appreciation continues.

A week ago the weather forecast was calling for 3-4 feet of snow over the Sierra Crest and (pipe) freezing temperatures in town this weekend. That sure got many local residents and contractors into overtime motion; the last snow stakes went in, snow removal contracts were signed, construction projects large and small were “buttoned-up” against the threat of significant snow and cold, etc.. But the storm faded north and brought a mere dusting to the region. But the long range forecast has moved to more wintry-type weather albeit rather mild. The Ski Area will “officially” open on Thursday and I’m sure there will be a crowd, but many of us were hoping for more snow and open runs at the opening. Darn…… Many who needed a reprieve, got a reprieve.
​​​​​​​It is too early to really get excited one way or another about the proposed tax law changes being debated in Washington DC. The significant changes in 1986 definitely impacted the Mammoth real estate market. Limiting the mortgage interest deduction (MID) to $500,000 could impact all of California and Mammoth specifically. We need to get down the road a bit before getting too concerned or jubilant. But the National Association of Realtors (NAR) is already pumping up the membership to react and comment (complain). NAR remains a powerful lobby in Washington DC and they own an impressive modern building just a short walk from Capitol Hill. They will certainly be there fighting for property owner’s rights.
The big news of the period is that the Town Council announced they have come to an agreement to purchase the 24-acre Shady Rest parcel in the heart of town. I’ve discussed this topic quite a bit lately. The Council has been in closed sessions over the past few months over this. The recent Workforce Housing Action Plan 2017 identified the acquisition of Shady Rest as the #1 goal (and two of the Council members have sat on the group).
Here’s the real estate part; the “announced” price is $6,500,000. But we have experienced that our community leaders are notorious for expressing higher sales prices than what is reality. But since this is a public transaction and public officials we can only hope that is the real number. That is roughly $271,000 per acre. That is the value of a mid-range one-fifth acre finished residential lot in Mammoth. But there is already debate over what the real value is.
The Mono County Assessor has the property assessed at $2 million. The property has not been to an appeals hearing in the past decade and certainly would have qualified for a Prop. 8 reduction during the last market decline. But the Assessor has moved many of the Prop. 8 reduced values back up significantly in the past couple of years. But not this property. And as I pointed out months ago the Town controls the zoning of the property and as long as it is zoned Affordable Housing the value is compromised. The seller represents they have over $12 million into the property.
Ultimately, if the Council was able to get the seller to agree to $6.5 million that will have to be the price. But it would sure be fun to “walk-away” from the deal and see if the price could be whittled down another couple million. But (affordable) housing is the hot topic of the day here in Mammoth and there are three Council seats up for re-election in June.
But the announcement of just four days ago sure conjures up more questions and none of them have yet to be addressed. The Town states that they have enough cash-on-hand to complete the transaction but there will be “financing” arranged during the 120-day escrow. I think we would like more information about that.
​​​​​​​And where does this leave the ice rink?? The final plans for Mammoth Creek Park have not been approved. There still doesn’t appear to be any real/final cost estimates. And the MLPD hasn’t finalized their move to the new station (I can see them moving things as I type) so we have no idea what the final cost overrun is there. And if we could expect similar overruns at the ice rink. But how much of the “cash-on-hand” was originally allocated to the ice rink construction? And how much of the Town’s borrowing capacity was allocated to the ice rink?
And since the Ski Area’s planners are rather adamant that the ice rink belongs in Shady Rest to spark the Main St. Revitalization, is there an implication that there may be a new ice rink location being considered in the back room? Mayor Wentworth did state at the announcement that “control of the parcel is critical to the Town’s continued pursuit of downtown revitalization plans.” (And don’t forget, whatever Rusty wants, Rusty gets).
Meanwhile the rumor around town is that the Ski Area is about to release new plans for Eagle Base which hopefully include gondola improvements and extensions. We’ll see. Something like that with some solid time-frame commitments along with some significant snow cold really jack-up the local real estate market. But as we learned from Intrawest, those types of announcements are better planned for periods when lots of people are in town, which certainly isn’t now.
And speaking of people in town, while trying to show properties the last couple of weeks, I ran across several units that were rented for long periods, like 10-14 days. It would appear that there is a slow but growing demand for longer rentals during the fall period. These are not big groups. And they probably aren’t paying huge amounts, but it appears there is growing demand. If the short term rental owners can generate ANY income in October they should be happy.

Lower-end condo sales are diminishing as the low-end inventory vanishes. Sales of low-end 1-bedroom condos continue to creep higher (and the new listing prices are moving higher beyond that). The historically least expensive 1-bedroom condos have moved to $200,000 and beyond, in projects like Krystal Villa East and West and Sierra Manors. New listings of 1-bedroom condos in better locations are now moving to $300,000 and beyond depending on condition.
​​​​​​​Sales of two small homes in Old Mammoth and Sierra Vista Estates (“behind the post office”) display that buyers are willing to pay ~$500,000 for old or funky properties. But there are still a few left looking for buyers.
The Woodwinds project built in the Sierra Star golf course continues to re-sell rather quickly. These were some of the last units built by Intrawest and were sold at the very peak of the market with some of the units sold at deep discounts after the market declined in the late 2000’s. 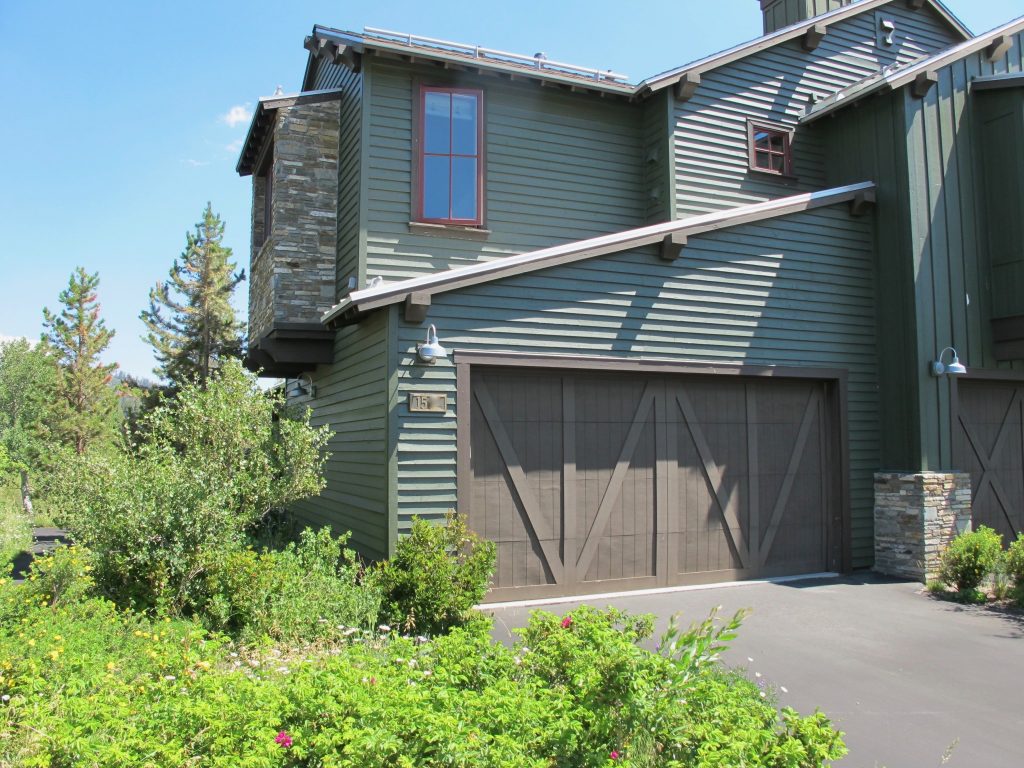 The new and under-construction units at Creekhouse have been solid sellers this past summer. Snowcreek just released three new units in a new
building and one of them is the “Morrison” plan. This is anincredibly comfortable 3 bedroom / 3.5 bath and 2-car garage floorplan. What makes the floorplan unique is that each bedroom has its own private deck. The living room and dining room also has a large wrap-around deck that is covered.
The main entry and garage access flows into great “utility”/mudroom space that flows into the kitchen/dining/living area. This is just an excellent floorplan offering wonderful interior space as well as a variety of private outside space too. The construction has just begun so a buyer will have to wait, but worth the wait!
​​​​​​​Listed at $939,900​​​​​​​
Listing courtesy of The Snowcreek Property Company

My regular readers know how I feel about Mammoth Mountain completing the gondola system. It has been the desire of the Forest Service to have it completed for the past 20 years. The plan has been to have skiers equally entering the Ski Area from a handful of “portals” rather than the emphasis on the Main Lodge. The plan has always been to reduce the vehicle traffic to the Main Lodge. The plan also allows skiers to enter from Eagle, The Village or Canyon Lodge and access the core of the Mountain ski runs regardless of snow conditions on the east side of the Mountain.
The Mountain’s planning consultants, Hart Howerton, highly endorse the plan. But the Ski Area owners simply don’t want to spend the money. Ironically, their lodging customer base at Eagle and the Village are the ones who suffer the most from this shortsidedness. I have even recommended that the completion of the gondola system should be a contingency of the Main Lodge land exchange.
What is even more insulting is that the major ski areas across the country are actively building new gondolas giving better access from the bed base to the most popular ski runs. Squaw Valley and Alpine Meadows recently announced that the new “California Express” is expected to be completed by the 2019-20 ski season. This new gondola will link the bases of the two ski areas giving skiers “seamless” access to over 6,000 acres of terrain.
And the environmental advantages are clear; reducing car and shuttle traffic for skiers, employees and local residents, protecting critical wildlife habitats, avoiding wilderness areas, and minimizing visual impacts. And today’s gondola construction can be accomplished without building roads by utilizing helicopters, etc.
And Whistler, that already has one of the most impressive gondola systems, recently announced another $275 million in capital improvements over the next seven years including a 163,000 square foot indoor water park.
We can only hope that Mammoth’s new ownership has some real improvement plans for Mammoth. The customers have waited long enough.
Thanks for reading!