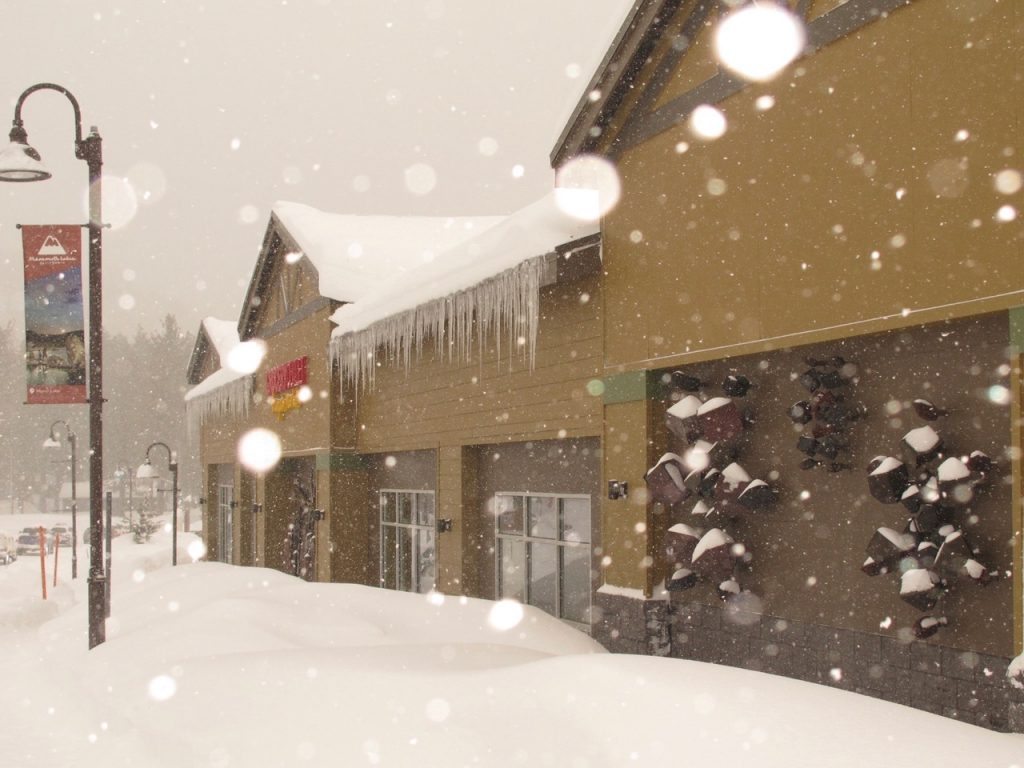 The Mammoth Lakes MLS is reporting 13 real estate closings for the past two week period ranging from a low of $252,000 to a high of $2,000,000. Of the 13 escrow closings, all but one were financeable properties and 10 were conventionally financed. This period last year there were only seven (7) closings and all of them condominiums. This year there were four (4) single family homes in the closings including two $1M+ sales.
The 10-year Treasury yield moved downward to 2.691%. With 10 of the 13 closings financed, buyers are obviously enjoying the return of very competitive interest rates. One year ago the 10-year was at 2.85%. The Mortgage Bankers Association now believes the 30-year mortgage rate will stay under 5% through 2020. And one of Mammoth’s most popular lenders announced this past week that they have approval to do 2nd home purchases and refinanceson the condo hotel properties in the Village and Juniper Springs Lodge. The 2nd home loans are 10-20% down depending on qualifications and “investment” loans are 20-25% down. This may spurn some additional sales activity in these units, the rental revenue has certainly been up the past 24 months.

At the period’s end the condominium inventory is down seven (7) to 100. There are now only five condominiums in Mammoth listed under $300,000, the least expensive being $275,000. One year ago there were only 58 condos on the market. There were a total of 10 new condo listings in the period, and none to contract. And again, these are new condos on the market, not re-listed properties. The median days on market (DOM) is 67.

The total number of properties in “pending” (under contract) in Mammoth Lakes is up another six (6) to 53 at period’s end. Of the 53 properties in “pending,” there are 29 in “Active Under Contract” status (formerly “back-up”). The total number of pendings in the aggregate Mammoth MLS (which includes outlying areas) is up two (2) to 72. This time last year there were 63 and 84 properties in escrow respectively. Market activity is lagging behind last year, but 2018 was an abnormally active winter selling period. Two years ago the pendings were 33 and 62 respectively.

Super Bowl weekend was wonderfully snowy and the snow is expected to continue into Tuesday. There is more snow in the longer range forecast. All of this snow may bring us to a normal amount of winter precipitation and beyond. Thank goodness. I skied on Friday before the storm and there were some pesky rocks starting to show on some of the main runs. They are covered now. The conditions for President’s Weekend and Ski Week shall be excellent. And we’ll have water for summer.

The Grocery Outlet opened last week. It is impressively large and functional. And well stocked (so far). I rode the Red Line shuttle up to the Village one evening and the shuttle stop is right in front of the entrance. About a dozen riders all carrying purchases piled into the bus. That is convenient. They were also a mix of local residents and visitors. The store’s visibility will attract the visitors. The prices will attract the local residents. I was in check-out line the other day and the local mom in front of me had an entire shopping cart full of purchases. And one long-time local resident said to me in the aisle, “I can afford to eat again.” And I’ve already been told the beer prices are the best in town. The store isn’t for everybody. But I’m thinking I’ll see it as a weekly treasure hunt. The artwork/sculptures they installed on the front of the building last week add a touch of class.

The December 2018 TOT (bed tax) numbers are in; The Town received $2.5M in TOT for the month, a record December. That is impressive. And I’m betting in the age of Airbnb there are some stragglers who haven’t reported/remitted. The Town is spending millions in marketing. It would be interesting to know the true cost//benefit expense/revenue numbers especially tracked back through the past 20 years. But I won’t count ever seeing that. The Town may be reaching a maximum potential TOT generation.

The YotelPad marketing continues in full swing and they are getting closer to a reservation process (probably starting in the next week). The sales team hinted at pricing in the past week. There are 140 Studio units in the project and half of them will be in “the $300,000 range.” And 75% will be under $450,000. (Condo hotel units are typically priced higher based on views and higher floors.) There are 16 1-bedroom units and they should be priced between $500-600,000. The Townhomes “Domos” should be priced around $1.5M. Interest remains “strong.”

I was flipping through some of the YotelPad insider marketing material and found this, “MINI IS THE NEXT BIG THING…Rising real estate prices are forcing purchasers to rethink space. At the same time, technology has made it easier to build intuitive intelligence into a floorplan. YOTEL designs efficient private PADs equipped with essentials, and common social spaces with plenty of wow factor. Guests and homebuyers get exactly what they need at a lower price.”

This is interesting juxtaposed to the strong local real estate sales of high-end homes. Does anybody really need a 5,000 square foot “mountain cabin” 2nd (or 3rd or 4th) home in Mammoth?…..The best answer I can get to explain the strong high-end activity in Mammoth is that the buyers come from southern California and perceive Mammoth as “good value.”

Or maybe these buyers are reading Mansion Global who recently deemed Aspen as the world’s most expensive ski resort real estate in 2018. It rose from being 3rd the year before. Aspen has some of “the priciest residential properties on the market globally.” Maybe more of the Aspen crowd will come to Mammoth Lakes and realize that yes, indeed it is a great value. The IKON Pass may drive that.

Two of the largest and most contentious property tax appeals are coming to the limelight this month. The “Ormat” appeal covers the geothermal plant assets behind the Hwy. 203 offramp coming into Mammoth. The taxpayer and Assessor have finally come to a “stipulated agreement” and that valuation will be in front of the Tax Appeal Board in the coming weeks. The fight over the assessed valuation dates back to 2010. Maybe during the next series of snowstorms I’ll jump into the 128 pages of analysis.

And then there are two weeks of hearings scheduled later in the month for the appeal of the Mammoth Mountain Ski Area assets from the sale two years ago to the group that is now the Alterra Mountain Company. MMSA and the Mono County Assessor’s office are both taking it very serious. And with non-residential properties, the burden of proof is on the tax payer…..

Recent media coverage has been highlighting a new and serious problem for the NFL; insurers are leaving the football market because Chronic Traumatic Encephalopathy (CTE) is the “new asbestos.” And the lawsuits come years down the road (tail risk). There have been over 100 lawsuits filed against the NCAA just in the past five years. And high school and Pop Warner players actually engage in more full contact scrimmaging.

But now the correlation for this neurological damage is being recognized with the game of hockey. The sport appears to be in denial just like football was. So what if Mammoth builds an extravagant ice rink that it can’t insure in the future??

Of the four single family residential properties that closed escrow, two were on the lower end and both were on the market all last summer and fall. The potential buyers I showed these properties rejected them mostly for the overall floorplans but also their very different locations. Both may see major remodeling, or not.

The Mountainback project has been a solid seller the past 12 months with short marketing periods and upward selling prices.

And in four (4) of the closings, the buyers were represented by out-of-the-area brokers. That’s different. We’ll see if that is a trend or coincidence.

Aspen Creek condos have been around since the early 1980’s. And while the location adjacent to Eagle Base makes them “winter oriented” this is a nice summer location too. The Town’s bike path “Creek corridor” segment is right there and the open space of the Valentine Reserve is adjacent also.
This project was built with understructure parking and internal hallways (like neighboring Juniper Springs Lodge and Sunstone). But this 2 bedroom /  2.25 bath condo has lots more square footage for the same price. This is unit #211 and it has a pellet burning fireplace so no hassles there. Solid granite countertops in the kitchen and baths (3 vanities). This hasn’t been a rental but it wouldn’t take much to get it onto a nightly rental routine. If the Ski Area does in fact development new amenities at Eagle Base, this is close but not too close.
Listed at $449,900

The Mammoth Ice Rink saga took another bizarre twist during the period. And I’m guessing the NIMBYs and the politically correct crowd will both engage. The ramifications of what is being proposed has yet to sink into the community at large. The Mono County Behavioral Health Department is now petitioning the School District and proposing to build an “affordable housing” project on the current ice rink site. They want a 55-year lease. The passing of Proposition 2 last November has provided new funding sources for affordable housing for the mentally ill.

The Behavioral Health Department has been searching for a replacement of the “Davison House” facility. That facility had been housing “up to 24 residents” for many years. The Davison House suffered major damage during heavy winters but was slated to be reconstructed. That has been deemed unfeasible. The previous residents were being provided “services” from the Department. The residents are the mentally ill and those with drug and alcohol problems (according to their website). In the past, most in the community referred to the Davison House as the “halfway house.” But we certainly can’t call it anything resembling that today.

But upon closer examination by the community (which is coming), how will putting such a facility right-smack-dab in the middle of our four schools and library be seen?? And adjacent to the Foundation’s proposed $30M Cultural Center. The poltical correctness and NIMBYism is bound to rise. And indignation too.

But there does appear to be a great opportunity. With available sources of State funding for this project, why can’t this work on The Parcel?? The Parcel’s proximity to public transportation and other services is superior. And there will actually be people living around the facility (isn’t assimilation part of the program?).  Common sense public planning just seems to be absent in Mammoth….

Meanwhile the city of Oakland voters approved a tax in November called the “vacant property tax.” And privately owned property in the city including residential, commercial or vacant lots — properties “not in use” for more than 50 days in a calendar year are subject to the tax. Most properties will be subject to an annual $6,000 tax. The city estimates the new tax will raise $10M annually that can be used for homeless services, affordable housing, etc.. And apparently San Francisco is considering a similar tax.

After hearing people last summer blaming Mammoth’s affordable housing crisis on the second homeowners, I can only imagine this type of tax will be proposed in Mammoth’s future….