The Super Dry February Ends With A Teaser!

The Mammoth Lakes MLS is reporting 27 real estate closings for the period ranging from a low of $40,000 to a high of $1,195,000. Of the 27 escrow closings, 22 were financeable properties and 18 were conventionally financed. The closings included three (3) in-town garages selling in the $40-60K range. They also included five (5) homes ranging from $685,000 to $885,000. Again, that segment of the market sat all last summer and fall (including most of these) and it took the winter season to create the demand. The 10-year Treasury yield dropped dramatically at the end of the period to 1.127% — over 40 basis points. Many financial outlets were stating it is an all-time low yield for the 10-year bond. Mortgage rates were already very low and may be sticky to go lower, but we’ll see what the next week brings for 10-year rates and mortgage rates. It may be a fantastic time to re-finance if the numbers work. And one thing interesting to note; some recent new purchase mortgages have taken far less than 30 days to complete. Obviously, some loan officers have found the trick to processing these loan packages quickly. This is something we really haven’t seen since the new Dodd-Frank regulations of almost 10 years ago. This time last year the 10-year yield was 2.755%. Simply amazing.

At the period’s end the condominium inventory is up five (5) to 69. That includes nine (9) new Creekhouse and Obsidian Villas units. So we’re sitting with 60 resale condos on the market. There were 23 new condos brought to the market during the period including four new to-be-built at Obsidian Villas. The new listings are all through the range and include two new 1-bedroom units in Grand Sierra Lodge (Village). There are 28 condos listed under $400,000. This time last year the condo inventory was at 94.

The inventory of single-family homes is even at 43. There were two new high-end residential listings. This time last year there were only 37 homes on the market. The numbers continue to show the disparity between condos and homes in the Mammoth real estate market.

The total number of properties in “pending” (under contract) in Mammoth Lakes is down seven (7) to 78 at period’s end. But that still includes the 15 Obsidian Villas townhomes under construction or to-be-built. Of the 78 properties in “pending,” there are 22 in “Active Under Contract” status (formerly “back-up”). The total number of pendings in the aggregate Mammoth MLS (which includes outlying areas) is down 11 to 93. This time last year it was 50 and 68 respectively.

Most of Mammoth seems oblivious to the two major news stories of the past week. Somehow that doesn’t surprise me. The longer term ramifications of the stock market sell-off and the virus concerns will simply have to play out. Prediction at this point is foolish. Long-time local residents have inherent disaster preparedness. Living in a remote location that is subject to major (and sometimes crippling) winter storms, power outages both past and present, earthquakes and volcanos both real and imagined, and other similar events and threats will do that to you. Anybody still remember the hantavirus scare?? Sometimes you just need to go skiing. One old-time local resident used to call it  “the great equalizer.”

Last weekend was the “post blackout” weekend and it was very busy. Post blackout wasn’t in the local vernacular two years ago. But we are seeing a clear trend. If the snow conditions on the slopes were better it might have been an overwhelming weekend. As it was, it balanced out the holiday weekend and Ski Week crowd. The mid-week this past week was dead. And with spectacularly warm weather it was a good opportunity to get equalized. A small storm front rolled through this weekend and gave us a half-foot of new snow. It will cover up some rocks.

Through the period Mammoth Mountain has gone the extra mile (as usual) to preserve the ski conditions in reasonable condition. It basically hadn’t snowed in the last 45 days. Snowmaking guns are now back all over the Ski Area. On the east side of the Mountain there was evidence they had groomed snow off (and closed) some runs to beef up the snow on other runs. The parks remain in exceptional condition. We will probably see more and more of the new permanently mounted snow guns (like those around the Main Lodge) in the coming years. Advanced snowmaking is a godsend. Despite the very dry February, tourism and business remain strong in Mammoth.

There was a very nice memorial for Dave McCoy held last Friday afternoon/evening at the Main Lodge sundeck area. They kept the lifts open later to celebrate the fun of skiing. Many Mammoth oldtimers were in attendance. Hopefully everybody rode the shuttle.

This weekend was the Mammoth Film Festival (#mammothff). A total of five nights, Thursday through Monday. It appears to be well attended. And at least they got great weather and some fresh snow. This event premiered in 2018 and appears to be gaining serious momentum. It certainly brings a different crowd to town. Many of the attendees have been walking around town and past my office. A few evenings ago, some of the gals were wearing short skirts, fishnet stockings and fur coats (synthetic I’m sure). Quite a difference from baggy snowboard pants.

I had several people call me this past week asking my opinion about the 2020 version of Prop. 13 that is on the ballot this Tuesday. It is a confusing ballot initiative and it is duplicitous tying it in any way to the Prop. 13 of 1978. Voting for it just gives the powers-that-be another opportunity to increase property taxes to help pay for schools.  It would basically double the debt caps allowed by the original Prop. 13.  Here in Mammoth, we passed a ~$100 million of indebtedness for our local schools a year-and-a-half ago. It increased everybody’s property tax. And the improvements at the schools haven’t even begun. In November we will be seeing even more assault on the original Prop. 13.  It will be a continued threat. I’ll be voting NO on Tuesday.

The new YotelPad “rumor” is that the developers will be coming back with a pure hotel proposal (no condo hotel with units for sale). The plan purportedly will eliminate the earlier proposed townhomes (“domos”) and will not include understructure parking. This will be curious. The understructure or covered parking requirement has been part of the Town code since the early 1990s. The understructure parking is a major expense. Since the property gets so much sun, maybe they will come back with some carport style covered parking with solar panels and offer free electric vehicle charging to their guests??? That could be a progressive step. How could the Town deny this? I look forward to seeing the critical thinking skills of our current Planning Commission.

​​​​​​​The start of the hotel renovation project at the Sierra Center mall is pushed back a couple of months. Mono County and other tenants have negotiated two more months of occupancy. The new County building isn’t ready yet and others are scrambling to find new locations. Commercial vacancies are disappearing quickly. Meanwhile, tenants at the infamous Berner St. property in the Village have apparently been notified that they too will be moving soon. The property was purchased last year and is zoned for a ~100 room boutique hotel. This would be great to see. This is one of the truly “blighted” properties in Mammoth.

People forget that Mammoth tried to do a redevelopment agency in the Village some 20 years ago. It was challenged in court and defeated. It changed the future of the Village Plan. Most of the area was seriously blighted. The Berner St. parcel remains the eyesore. Thankfully it is mostly hidden. The community should look forward seeing this proposal and change. Hopefully the developers have their financing in place. Also in the Village, the dry weather has allowed the Burgers construction crew to get most of the steel structural components in place for the upstairs addition which should commence in spring. And Mammoth Brewing has a new roof and ongoing residing. That corner was once slated for a major hotel. Looks like it will remain a brewery for the immediate future. Thirty years later the North Village Plan didn’t end up like the “dream” but it may end up working and having some local character too.

The constructions bids for the Ice Rink/Recreation Center go out this Friday and close April 10.

There were four residential closings in the Mammoth Slopes subdivisions. This is the residential area between the Village and Canyon Lodge. This has become an increasingly popular location for winter oriented buyers. Here’s the proof. Included in the sales was “the round house” that had been on the market for many months and ultimately had multiple offers. The sales also included a “flip” on Canyon Blvd. Paid $609,000 13 month ago. Sold for $735,000. The improvements included new kitchen and baths, lots of stone flooring, barn doors, new siding and exterior rock veneer, etc. They didn’t change the dysfunctional floorplan. There was another residential closing at the entry to the Knolls subdivision, just a short distance from the Village.

​​A Bluffs lot closed for $242,500. Amazingly cheap for such a premier neighborhood. 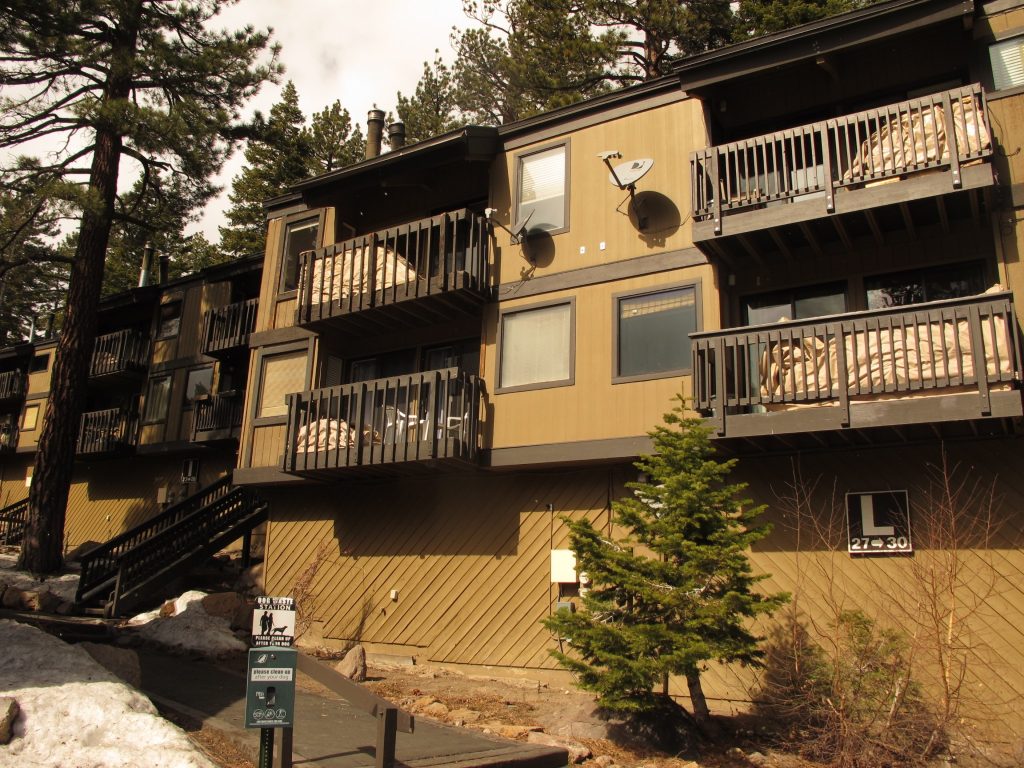 Real estate odds and ends from the period;

• Speaking of pure hotels and financing (like I did in a recent Q&A), a recent article from The Real Deal — New York real estate news, notes numerous high-profile hotel loans have recently gone into default in New York City. Average daily room rates have dropped to 2013 levels. One active lender, Colony Credit, cited a “significant deterioration in the New York hotel market.” Apparently the WeWork fiasco hasn’t helped. But all of this once again begs the question about the potential financing of a pure hotels here in Mammoth Lakes. Time will tell. Maybe Alterra has some pull.

• A recent article in SnowBrains headlined that Aspen Mountain was experiencing fewer local pass holders and more IKON Pass holders this year. Aspen had 1.55M skier visits last year (more than Mammoth). But apparently only 9% were IKON Pass holders. One Aspen executive stated that “We’re seeing a significant increase in IKON Pass use” this year. One idea from the article was that the less frequent powder days this year equated to fewer local pass user days. But all-in-all they are reporting “fewer peaks and valleys than we did in previous seasons.” So Aspen is experiencing what Mammoth is experiencing. And that was the primary goal of the IKON Pass. But not everybody is happy about it.

• On the Mammoth real estate side, one thing has recently (re-) appeared in the market; there are a number of investor/buyers looking in the market that have 1031 (tax deferred exchange) money parked with their accommodators. These investors have a “clock ticking” and need to close or else they face serious taxation and potential depreciation recapture. They are motivated. But most are pretty shrewd. Mammoth has always been an active 1031 market namely because the condos can be owned “for investment” (STRs). Sometimes it is just a place to “park” money (the Westin Monache is a classic location). But it is interesting that in this stage of the market investors are selling properties without solid replacement properties identified. It happens, but right now there appears to be a substantial number of these parties out there.